December 23, 2017 In Fundamentals Of Photography

In a previous blog, the guide to understanding exposure,  I briefly talked about the three critical elements in photography that control exposure.  These are shutter speed, ISO, and of course aperture.

By definition, aperture means an opening, hole, or gap.  Or, to be more precise, “it is a space through which light passes in an optical or photographic instrument, especially the variable opening by which light enters a camera.”

In other words, light passes through the aperture of a lens before reaching the shutter and, ultimately, the image sensor.  The aperture ring’s location is behind the camera’s lens. fig 1

We can compare aperture to the iris of a person’s eye.  The iris in the eye is a thin, circular structure responsible for controlling the amount of light reaching the retina by controlling the size and diameter of the pupil.  The aperture in a lens performs the same function in pretty much the same way.  Aperture “rings” are found predominantly on old manual focus lenses.  The aperture was adjusted by manually turning the ring on the lens itself.  These days, however, lenses do not have aperture “rings” as such because the camera controls aperture electronically, although the principle and functionality remain the same.

HOW THE APERTURE RING WORKS

The aperture “ring” consists of several interlocking metal leaves make up the mechanism (fig.2).  These “leaves” open and close to various sizes commonly referred to as f-stops. (fig.3).

We refer to the measurements of the aperture as f-stops.  Why number them this way?  I know, it all seems so senseless and erratic, but each number represents the precise mathematical value of the diameter of each aperture opening. To us photographers, the math behind each numerical value and size of diameter is of little (if any) concern.  For the photographer, it is all about light.

The smaller the f-number, the wider the opening and thus the more light reaches the image sensor.

The higher the f-number, the smaller the opening and subsequently the less light reaches the sensor.

Furthermore, each f/stop allows precisely half the amount of light through than the previous f/stop value.  In other words, f/2 allows only half the light through than what f/1.4 does, and so on.  This concept may seem confusing at first because it seems there is no relationship between the numbers.

To confuse matters, even more, aperture also controls depth-of-field.  Without going into too much detail, depth-of-field refers to how much will be in focus both in front and behind your main subject.

The smaller the f-number, the larger the opening, the less depth-of-field. (fig.4)

The higher the f-number, the narrower the opening, the more depth of field. (fig.4)

A wide f/stop like f/2.8 will result in a shallow depth-of-field. Focusing on your subject, and using a f/1.4 (narrow depth-of-field) will lead to the subject being in focus, but the other parts of the image both in front and behind the point of interest are blurred. (fig.5)

Conversely, a narrow aperture like f/22 will offer greater depth-of-field usually resulting in most of the photo being in focus. (fig.5)

The combination of a wide aperture and a fast shutter speed can allow the same amount of light through as would the combination of a slow shutter speed and narrow f/stop, and vice versa.  As one “setting” is changed to let in more light, the other must change to let in less light to maintain the same brightness.  The effect of the image can be different, but the amount of captured light remains constant.  The term used to describe these combinations is “equivalent exposures.”

For this reason, the light meter in your camera becomes very useful indeed (fig.6). 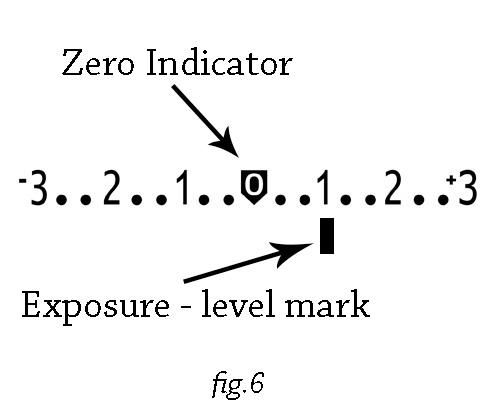 The idea, to obtain the correct exposure, is to line-up the exposure level mark with the zero indicator on the camera’s light meter.  We achieve this by adjusting either the aperture or shutter speed values or, as a last resort, the ISO.  There are times, however, when you may want to deliberately have a slightly over, or underexposed exposure based your creative vision or a particular scene.  There are no hard and fast rules in photography.  The light meter is merely a tool, a reference, to help you achieve your goal.

All the tools such as the histogram, light meter, and countless combinations between f/stops, shutter speed, and ISO, are there to help you achieve your photographic vision and creativity.  Understanding the concept of “aperture” is the first step.  Now, with this newfound understanding, it’s time to put it all into practise…….