Five tips for taking images that are tack sharp

Relying on your camera’s auto-focus capabilities more often than not results in less than tack sharp images.

Remember they might look great when reviewing them on the LCD screen.  However, when you get home and view them on a much larger screen, they may not be as crisp and clean as you had hoped.

In truth, this has happened to me far more times than I care to admit.

So what is the answer?

Before we get to that; first take the shot, focus as best you can, but take the shot! I am a firm believer in that. Perhaps this stems back to my journalism days.

There is nothing more frustrating than missing that specific moment in time to take the shot just because you were fiddling with aperture settings, or trying to set your tripod up just right.

The moment is gone, the opportunity missed.

My first ever photograph of a lion was entirely out of focus. You could just barely tell it was a lion. My first ever lion sighting! I was so excited…and I botched it! The lion moved on, and I was unable to get a second crack at it.

But I’ll let you in on a little secret, to this day that crappy image, remains one of my favourites. Why?

So, I’ll repeat…first take the shot.

(If it had been an image of a waterfall that had been there for thousands of years and would be for a thousand more, well, then there’d be no excuse)

So what’s the answer?

Obtaining tack sharp images can’t be pinned to one technique alone. By combining several methods, you can achieve near perfect focus.

Yes, they are cumbersome and heavy, but there is no other piece of photographic equipment out there that can hold your camera as steady as a tripod can. As a rule, avoid hand holding your shots as much as you can. This way you will avoid any possibility of “camera shake.”

Using a tripod will give you more creative control particularly with slow shutter speeds, and at the same time take sharp images.

#2 – Use a remote shutter-release or timer

I know this may seem daunting, mainly if your eyesight, like mine, is not as good as it once was, but bear with me and I’ll explain…

If set on auto-focus, when you press the shutter release button the camera will take a fraction of a second to focus before taking the exposure. That fraction of a second, no matter how small, will cause a tiny vibration that could affect the “focus” of your image.

So how to get around that…. Well, use the camera’s auto-focus functionality to focus on your subject.  Once focus is locked, switch back to manual focus and take the shot. By doing this, you are eliminating the vibrations that occur within the camera as it tries to focus.

In DSLR’s the mirror is situated in front of the shutter which is, in turn, is located right in front of the sensor. Simply put, when you take an exposure, the mirror flips up immediately before the shutter opens and thus allowing light to hit the sensor. That “mirror flip” causes vibrations within the camera ( the technical term used is vibration-induced motion blur)

By engaging the Mirror lock-up functionality, you can avoid this.

Engaging this function will vary depending on the camera. The Canon 5d Mark III, for example, requires for the shutter release to be pressed twice when mirror lock-up is engaged. The first “flips” the mirror, and the second activates the shutter curtain thus exposing the sensor.

When you have engaged the mirror lock-up function, the subject is no longer visible through the viewfinder.

Hence shooting in “live View” mode.  Now not all cameras will have this functionality available.

In “live view” the mirror is up and in the locked position which allows the photographer to see the image on the camera’s LCD screen. This function can be a particularly useful focusing technique.

When shooting in “live View,” the Canon EOS range, for example, uses the default Flexi-zone-single focusing mode. This gives you a single auto-focus point (white square) in the center of the LCD screen. You control the square using the multi-controller and moving it to any part of the screen where you wish to focus. Once you have achieved focus, the square turns green.

On the downside, battery life takes severe knock, so make sure you have extra batteries when you are out in the field shooting in “live View.”

Every lens has a sweet spot where it functions at its best. In most cases, lenses are at their sharpest in their “mid ranges” usually two stops below their widest aperture. However, this doesn’t mean we should ignore the full extent of our lenses capabilities. We should also remember that composition plays an important role when deciding on a particular aperture.

Sometimes we may incorporate all of the above techniques in a single exposure. At other times we may only use one or two.

Every situation we as photographers encounter may vary slightly, and it may not always be possible to manipulate each component to our liking when we are out in the field.

More importantly, we don’t always have to get it right every time. In my opinion that is how we as photographers grow. Sure, we should strive to take sharp images as often as possible. Sometimes, however, it’s the journey, the experience and the emotions we feel while capturing these images that stay with us forever.

…which brings me back to that lion… 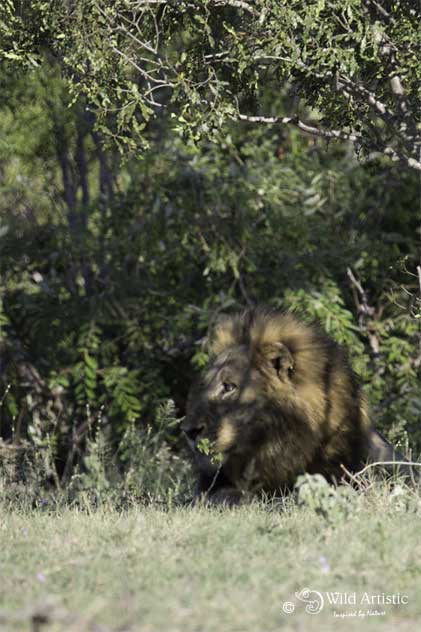